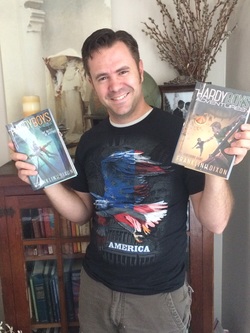 Kevin Keele is the current illustrator for The Hardy Boys Adventures, having illustrated volumes 3-12.
The covers are digitally rendered, but he sketches the scenes out on paper before the rendering
​and the publishers decide which scene to be done. 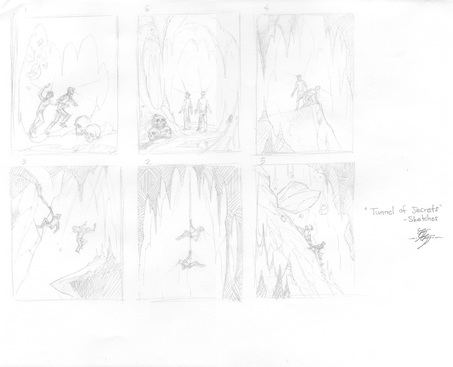 Interview with Kevin Keele - July 4, 2016
1.  When did you decide to do illustration as a career and what type of training did you have?

I have always loved drawing & painting, but didn't decide to really focus on illustration until about 5 years ago.
I am mostly self-trained, but have recently gone through some independent courses like Bill Perkins' Boot Camp.

2.  Did you read many of "The Hardy Boys" books growing up?

Yes!  I loved "The Hardy Boys" and was a regular reader of the series through much of my childhood and teenage years.
The chance to illustrate the covers is a dream come true.

3.  How did you land the job of creating the covers for these new stories?

It was offered to me through my agent with Shannon Associates.  I enthusiastically accepted!

4.  Would you mind telling me how you go about creating these covers?  Are you given a manuscript from the publisher or are you given
a very detailed scene you are to create?  How much freedom are you given to create?

I am occasionally given a manuscript, usually a synopsis or the general theme.  I create several sketches of potential
covers for the publisher to choose from.  After they do, I take the sketch to final art.

5.  You've illustrated the covers for "The Hardy Boys Adventures" volumes 3-12.  Are there plans to continue and what other projects or
jobs can you mention?

I have done others yet to be released and I'm happy to continue as long as they'll let me.  :)
I've also illustrated the covers for the American versions of the Rose series by Holly Webb and the Masterminds series by
Gordon Korman.
Proudly powered by Weebly